This guide will assist you in writing research papers using the American Psychological Association (APA) Style. It will help explain formatting your paper as well as proper citation for various resources.

When writing a paper, consistency is key.  Consistency in order, structure, and format allow the reader to focus on the content of the paper rather than its presentation.

In general, guidelines for format apply to both student papers and professional journal publications.  Other projects, such as a website, a conference poster, or a PowerPoint presentation, may require other formatting to optimize presentation.

Always follow the specific guidelines provided by your professor, and don't be afraid to ask for clarifications on format.

Not all sections will be required for all papers.  See your professor or syllabus for requirements for your specific assignment.

A student paper should have the following on the Title Page:

An example is shown below: 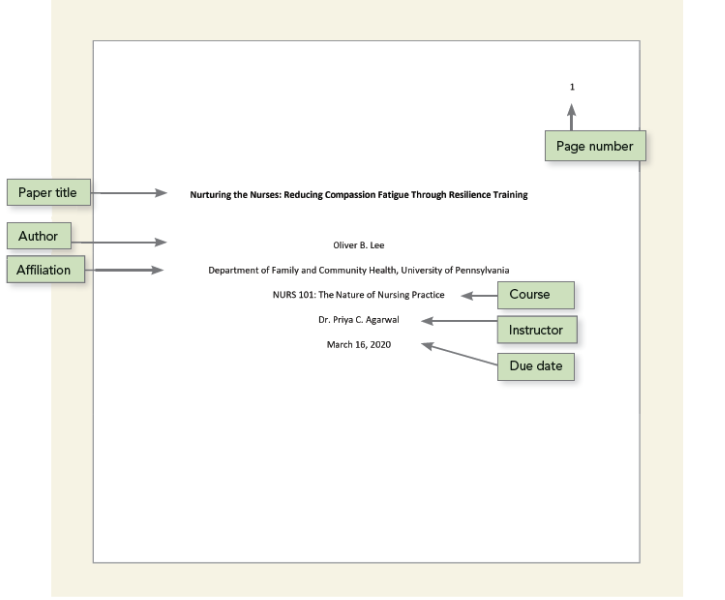 Student papers do not require a running head, unless requested by the professor.  This is an update from APA 6th edition.

Align the text of the paper to the left margin.  Leave the right margin uneven.  Do not use full justification.

Do not insert hyphens in words at the end of a line.  It is acceptable if your word processing software automatically inserts breaks in long hyperlinks.

Indent the first line of each paragraph of text 0.5 inch from the left margin.  Use the tab key to create the indentation; do not use the space bar to indent.  Exceptions are as follows:

The following fonts are acceptable for APA 7th edition.  Always check if your professor has specified a particular font and size.

In general, double space the entire paper, including the abstract, text, block citations, table and figure numbers, notes, and reference list.  Do not add an additional line after or before paragraphs.  Exceptions are as follows:

Use one inch margins on every side of the paper.

The following are some formatting guidelines for your reference list.

For student papers, the page header consists of the page number only.  The title page of every paper will be numbered page 1.  APA 7th edition no longer requires student papers to use a running head.

Professional papers require the use of a page number and a running head.  The running head is an abbreviated version of the title of your paper, or the full title if it is short.

If your professor wants you to use the professional format, the following is a guide to using the running head.

Headings identify the content within sections of a paper.  Make your headings descriptive and concise.

Use only the number of headings that are necessary; short student papers may not require headings.

Because the first paragraphs of a paper are understood to be introductory, the heading "Introduction" is not needed.  For subsections within the introduction, use Level 2 for the first level of subsection, Level 3 for the next subsection, and so on.

The APA guide provides guidance on a few different aspects of grammar.  If you need additional assistance with writing or grammar, visit the Write Solution for help.

Anthropomorphism is when writers attribute human actions to inanimate sources or nonhuman animals.  For example, the incorrect phrase would be "The theory concludes" as it seems as though the theory is the one actually making the conclusion, not the writer.  Therefore, the proper phrase would be "The theory addresses," as a theory can address, indicate, or present, while researchers and writers conclude.

You have higher odds of being injured by a vending machine than a cat.

The above sentence has two possible conclusions:

Use the chosen verb tense consistently throughout the same and adjacent paragraphs to ensure smooth expression.

Use the following tenses to report information in APA papers.

Use first person pronouns to describe your work as well as your personal reactions.  Use "I" if you wrote the peaper alone;  use "we" if you have coauthors.

Do not refer to yourself in the third person.  This can create ambiguity for readers about whether you or someone else performed an action.

Avoid the editorial "we" to refer to people in general.  Instead, specify who "we" defines.  Ex. "As young adults, we often worry about what other people think of us."

Level three, four, and five headings have changed.  All headings are now written in title case (important words are capitalized) and boldface.  Headings are distinguished by use of italics, indentation, and periods.

7th edition now endorses the use of "they" as a singular pronoun.

Use "person-first" language when possible.

Avoid the use of adjectives as nouns to describe groups of people.

Use one space after a period at the end of a sentence, unless instructed otherwise.

Use quotation marks around linguistic examples rather than using italics.